Amid crisis, the CU works on a more efficient dormitory management model

Bratislava, 27 October, 2020: In March 2020, Comenius University almost completely closed its dormitories. Student accommodation was reopened for the summer and students gradually returned to the dormitories from the beginning of September. Due to the rapid spread of the coronavirus, however, CU reintroduced distance tuition on 5 October 2020 and encouraged the students to move out of the dormitories for the rest of the semester. The university will use this period of limited operation to set up new dormitory management processes.

The university maintains a limited operation of its student dormitories for those whose social or family situation means they have nowhere else to go. Approximately 350 guests remain accommodated at the Družba Halls of Residence and about 1200 persons still rent rooms in the Mlyny Halls of Residence.

Security and anti-epidemic measures also had an impact on the bottom line of the dormitories. The university needs to take into account the loss of income from accommodation fees, as well as the rental of its real estate. Despite the difficult situation, Comenius University has managed to implement projects worth more than five million euros since the new leadership took over in February 2019. The university renovated the roofs of blocks E and V of Atrium Houses at a cost of 170,000 euros, replaced the HVAC system in the Venza student canteen for 110,000 euros, refurbished the heat exchanger of the Couples Dorm for 450,000 euros and replaced the elevators in the high-rise block A of the Ľ. Štúr and the Couples dormitories for 120,000 euros. The university plans to make use of the current down-time for other renovations such as the replacement of balcony railings of the high-rise buildings, replacement of furniture, renewal of wall paint and gradual renovation of communal sanitary facilities in the Atrium Houses section of the Mlyny Halls of Residence. At the same time, it plans to change the management of the student dormitories.

During this turbulent period, the dormitories were headed by director Peter Petro. His one-year contract with the university expires on 31 October, 2020. Due to the current limited operation of the dormitories the Rector of Comenius University Marek Števček decided not to announce a new competition for his position. "I want to thank Mr Petro for his work. A year ago when he assumed his duties he knew he was facing a great challenge, even though at that time we had no idea that life at the university and its dormitories would have to weather a full-blown pandemic. In this situation, University management decided to assume greater control over the administration of our dormitories in order to increase the transparency of various processes and the efficiency of our investments," said the CU Rector. "We need to cope with the problem of lacking past investments and ensure that we bring the dormitories up to the current standard."

The Rector of Comenius University put the Quaestor of CU Ingrid Kútna Želonková in charge of the Mlyny Halls of Residence as of 1 November, 2020. The system of administration of the self-managing components of Comenius University should undergo a fundamental reform in the foreseeable future after thorough discussion at the level of the relevant bodies of academic self-government. Rector Števček plans to boost the influence that university management has in the administration of self-managed components, including the largest Slovak student campus.

By the end of 2021, the university plans to carry out further renovations worth more than six million euros which will be obtained through a special purpose grant from the Ministry of Education, Science, Research and Sport of the Slovak Republic. We published dorm development plans in March this year and we will present an update as soon as the impact of the current pandemic on the university's economic situation becomes clear. In its dormitories the university provides students accommodation at prices which are on par with a social service - the monthly rental of a bed in a dormitory room starts at 47 euros. The revenue from the rents, however, does not cover the cost of operation and planned renovations. Notwithstanding, the university management believes that we will be able to provide this service despite the inherent financial deficit even after the end of the current pandemic. 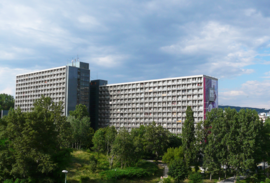